Football season is upon us.

I’m sorry super convenience lovers, but with guac…freshly homemade is the ONLY way to go.

It doesn’t involve a lot of ingredients.

It doesn’t take all day to make.

It tastes the best.

You’re running out of reasons not to make your own.

Ok, ok so it’s not as fast as ripping open a container but who wants to deal with those weird little vacuum sealed bags it comes in so you have to squeeze oddly flavored green goo into a little plastic container anyway?

I bet you will too.

Especially after you’ve tasted this.

You just need some ripe avocados (we’re goin 4 avocados), an onion, and a handful of cherry tomatoes.

When I tried to type cherry tomatoes just now I accidentally wrote cheery tomatoes instead.  That sounds about right…

Also honestly….you don’t even need the onions and cheery tomatoes! You could have JUST avocados and be good to go.

We need to get those avocados into a bowl to mash them.

Cut them in half and open them like a book.

I’m going to teach you a trick and officially smash your last reason not to deal with avocados!

Chop at that big sucker of a pit with your knife so it sticks in there like this: 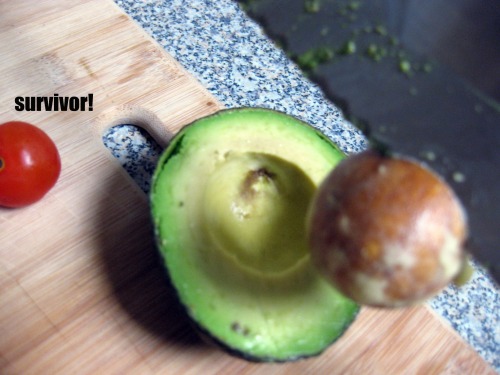 Now just take a spoon and run it between the skin and the meat of the avocado. Pile it up in a super appetizing bowl of green mush!  Which we will make delicious.

Now just smash them up, dice half your onion and chop your cheery tomatoes into quarters.

Note: I like cheery tomatoes because they hold their shape better when you cut them up.

Throw everything your bowl with juice from about half a lime, salt to taste and a DASH (seriously we’re talking not a lot here at all just a hint) of garlic powder and LOOK! 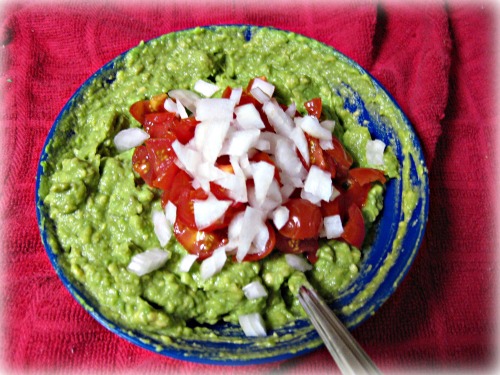 It’s it’s like a tasty Mexican flag in a bowl!

Which you should immediately consume with chips.

If you happen to have leftovers..

…cover it with plastic wrap and press it down so that it literally touches the guac. There shouldn’t be any air between the covering and the guacamole.

That way nobody turns brown and everybody is happy.

(sort of a recipe I guess…)

a handful of cherry tomatoes, quartered

a dash of garlic powder

1. Cut the avocados in half, remove the pit, and spoon the meat into a bowl.  Mash with a fork or potato masher until it reaches the desired consistency.

4. Serve immediately (or it will brown) with chips or add to a seven layer dip! (recipe soon)

Talk to me! Cancel reply